When you hear Mole, what comes to your mind? Chocolate? Chilies? Rice? Hhhm yum. I’m drooling already as I’m writing this. Well, all of those are right and a whole lot more. But did Mole really originate in Mexico? Or was it just popular in Mexico? Well, let’s find out.

There are many theories about what Mole is exactly. Some say the spice of life. Some say it is simply a Mexican soup. But all will admit that Mole is a delicious and very unique type of sauce. It is a cooking sauce that has been described as "the essence of Mexican cooking." The word mole comes from the Nahuatl name for the dish, "Molli". There are many types of mole sauces, but what they have in common is chiles and spices used to create a thick sauce often served over meats or poultry.

Mole is a spicy sauce that comes from Mexico, was the creation of early Mesoamerican people. It is also known as Mole de Guajolote and Mole Poblano and is one of the eight Mexican dishes listed in the "Guinness Book of World Records" as the world's most expensive cuisines. It is said that the complexity of these moles hints at a sophisticated culinary sensibility to ancient Mexicans.

Mole poblano is one of the most well-known types of Mexican moles because it contains chocolate among its other ingredients. Mole negro, which translates to the blackened sauce, also contains chocolate but no cinnamon-like other types do. Other varieties include mole Colorado, mole Rojo, and mole Verde.

Mole is thought to be one of the first cooking sauces to originate in Mexico. It dates back to the pre-Hispanic era, where it was known as "chilmulli" (a word that means chili sauce), which eventually evolved into "mulli" and then became "molle." For example, Aztecs used chilies with chocolate or maize to create their cooking sauces. The use of chili peppers originated at least 5000 years ago in South America; this suggests that moles have been around for a long time. There are many different theories about how mole was discovered, but there is evidence that it evolved from cooking techniques used by the indigenous people of Mexico. For example, experts have proposed that cooking chocolate with chilies may have been started because cocoa beans were often discarded after being removed from their shells, but cooking can make them more palatable.

Mole's history has not always been easy; the production of mole poblano almost ended completely during the Mexican Revolution because cooking ingredients were scarce. Luckily for this dish and its fans, people who could afford to eat it before the war would give portions to those who couldn't in order to prevent mole from becoming extinct.

Mole is a rich, complex sauce that can be traced back to the Aztecs in Mexico. It is said that when the Spanish conquistadors arrived in Mexico, they were served a mole and did not like it at all. They thought it was very spicy and did not like the flavor. This caused them to brand the sauce and its main ingredient chilies as evil and devilish; this also led to classifying the sauce as alcoholic and therefore only fit for drunken people.

In present-day Mexico, moles are consumed on a daily basis despite economic factors such as higher prices and scarcity of cooking ingredients. Mole is consumed on a daily basis in Mexico for many reasons. The cooking sauce goes well with any type of meat or poultry and offers an intense flavor profile. A good mole may incorporate not only dozens, but sometimes over 100 distinct ingredients, and it can be enjoyed as a side dish with rice and beans, as a savory entree with chicken or turkey, with pork chops or fish, or even alongside tamales or other steamed corn-based dishes.

As you can see, no two moles are alike, just as no two kitchens have the same recipe for this Mexican staple. This month we’re lucky because Chef Alejandro will be walking us through the bits and pieces of making an authentic mole. Yes!!!! First, he’ll show you how to make traditional Mexican-style rice. Then, he’ll walk you through each step to make his famous mole, a family heirloom adapted from his Abuelita Maria’s recipe! What’s more, he’ll show you the simple technique for pan-searing and baking chicken for a crispy browned exterior and tender center. Learn a ton of culinary skills and a truly spectacular dish in this live cooking experience! So don’t miss out and book the experience now. You’ll learn mole from scratch and we’re throwing in Sarah's signature Tamarind Margarita to make the cooking experience more exciting. 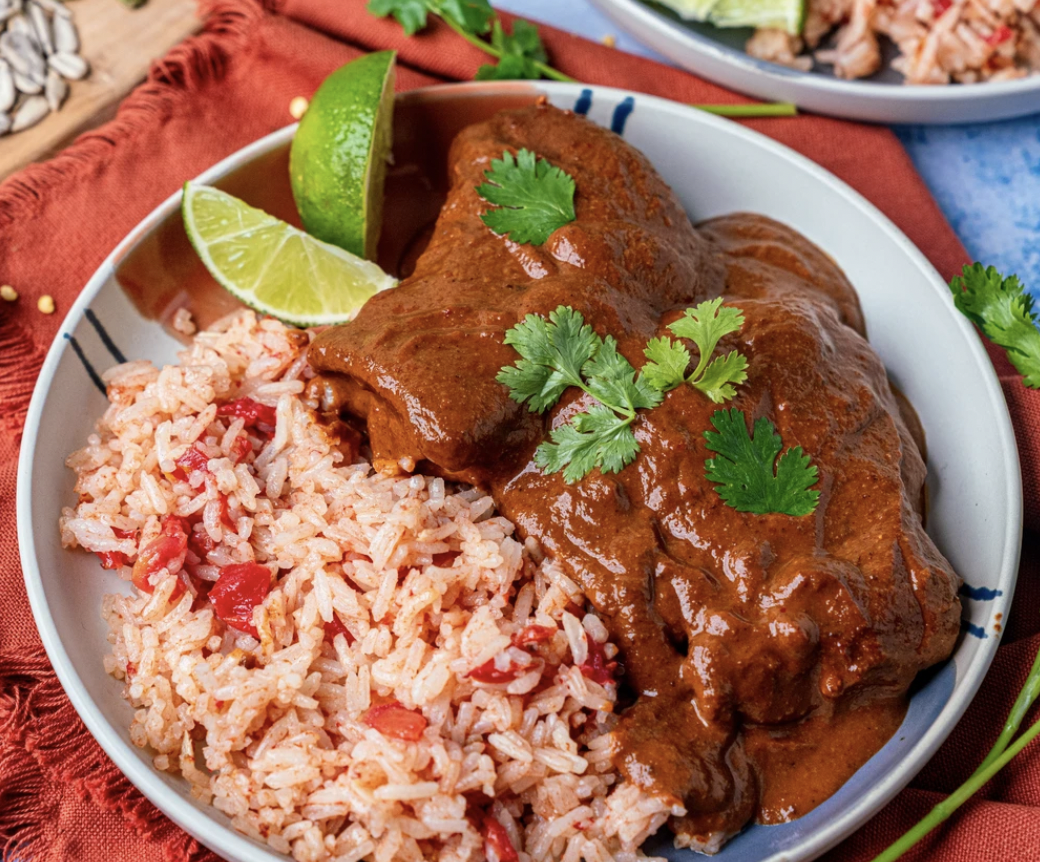 One Hour Before Prep

Want to take your dishes to next level with a step-by-step video instruction? We have on demand classes that feature dishes you never knew you could make at home. Click here! Interested in a private event with truffle shuffle? Click here to learn more.

Chef Marketplace
Culinary Academy
Become a Chef
About the Membership