Everything You Need To Know About Ramen

Fall is finally here, and we're eating salads for dinner by way of this Shoyu Ramen. It's the perfect fall and winter food… am I right? When I hear the word "ramen," I'll admit that my mind instantly jumps to the brick-hard blocks of instant noodles that have been a staple of my diet in college and beyond. In actuality, authentic Ramen is more than that. I'm not a ramen connoisseur, but I'd been to a few ramen places in Japan and was curious to see how this one compared. So we did a little digging, and here's what we found:

Ramen is one of the most ubiquitous foods in the world, especially in college dorm rooms. Yes, it can be those cheap packets of dry noodles with seasonings. But authentic and fresh Ramen is a Japanese dish made up of pulled wheat noodles in broth, typically flavored with soy sauce or miso, and uses toppings such as sliced pork, dried seaweed, green onions. It is often served alongside other dishes like kara-age (fried chicken), gyoza (pan-fried dumplings), tempura (deep-fried vegetables) to make for a complete meal.

The Origins of Ramen

There are multiple accounts on the origin of Ramen. According to some, Ramen was initially created by mixing Chinese noodles with local seafood and meat-based broth introduced to Japan by Chinese immigrants around the late 19th century. In fact, Ramen comes from the Chinese word "Lamian or 拉麵," a type of soft wheat pulled Chinese noodles.

The earliest instance of Ramen in Japan appeared when Mito Komon tasted a Chinese dish that featured pulled noodles in a soup. The dish was then "Japanized," and the first ramen restaurant, Rairaiken, was born. It opened in Asakusa in 1910. But as years passed, the dish has evolved, incorporating local flavors throughout different regions within Japan, resulting in various styles of ramens available everywhere today.

There are many different types of Ramen, each with its own unique ingredients and flavors depending on where it is created initially. Below are some of the popular ones:

Miso ramen is a staple in Japan and is usually made with pork and vegetable broth mixed with soybean paste (miso).

Its stock is mainly made from boiled-down pig bones, which creates a thick broth. It's originally from Fukuoka but has gained popularity throughout Japan.

Hakata typically uses tonkotsu (pork) soup combined with chicken soup to create a rich, creamy flavor that gets thicker as you eat the noodles after each bite.

This regional style of Ramen was created on the island of Hokkaido and can be found mainly in Sapporo. It uses copious amounts of salt, giving it its distinct taste and smell.

It includes a soy sauce base broth mixed with other ingredients to create different tastes depending on the region. It is originally from Tokyo but can be found throughout Japan.

Another popular ramen type, Hayashi Ramen, originated in Hakata but has since spread across Japan to become one of the most well-known Ramen.

Tsukemen is basically cold noodles and hot dipping soup instead of pouring everything over at once like most noodle dishes. Tsukemen is also known as zaru soba. It's common to find tsukemen at outdoor food stalls during the hot summer months in Japan.

How To Build Your Own Ramen

Three main parts make up the structure of Ramen: broth, Tare, and toppings.

The broth is made from boiling pork bones, chicken bones, or both to produce a rich flavor with plenty of umami taste. Next, there's Tare, a seasoning put into the ramen broth to create an overall "soup" taste. This determines how flavorful and rich the soup will be. A balance between sweet, salty, bitter, spicy, and sour is desired for a well-balanced bowl of Ramen. And lastly, the toppings may differ depending on the variety of Ramen being served at the restaurant but are usually some combination of vegetables such as bean sprouts, menma (fermented bamboo), scallions, green onions, spring onions, cabbage, seaweed products like nori or pork products like sliced pork belly—popularly called Chashu Ramen.

In the streets of Japan, Chashu Ramen can be found everywhere in Japan with specialty shops, street vendors, or kiosks. Each region within Japan has its own unique take on Ramen, so it is best to try them all.

But today, let's start with the most basic. Why not Shoyu Ramen from scratch? Shoyu Ramen can be complicated to make. It takes time and technique to make the broth, with its complex flavors of soy and pork, but it should be a breeze if we learn from an expert. Yes, Chef Tucker will walk you through each step to braise pork belly, marinate soft-boiled eggs, and make a delicate shoyu broth from start to finish. Sounds exciting, right? Book the experience now! 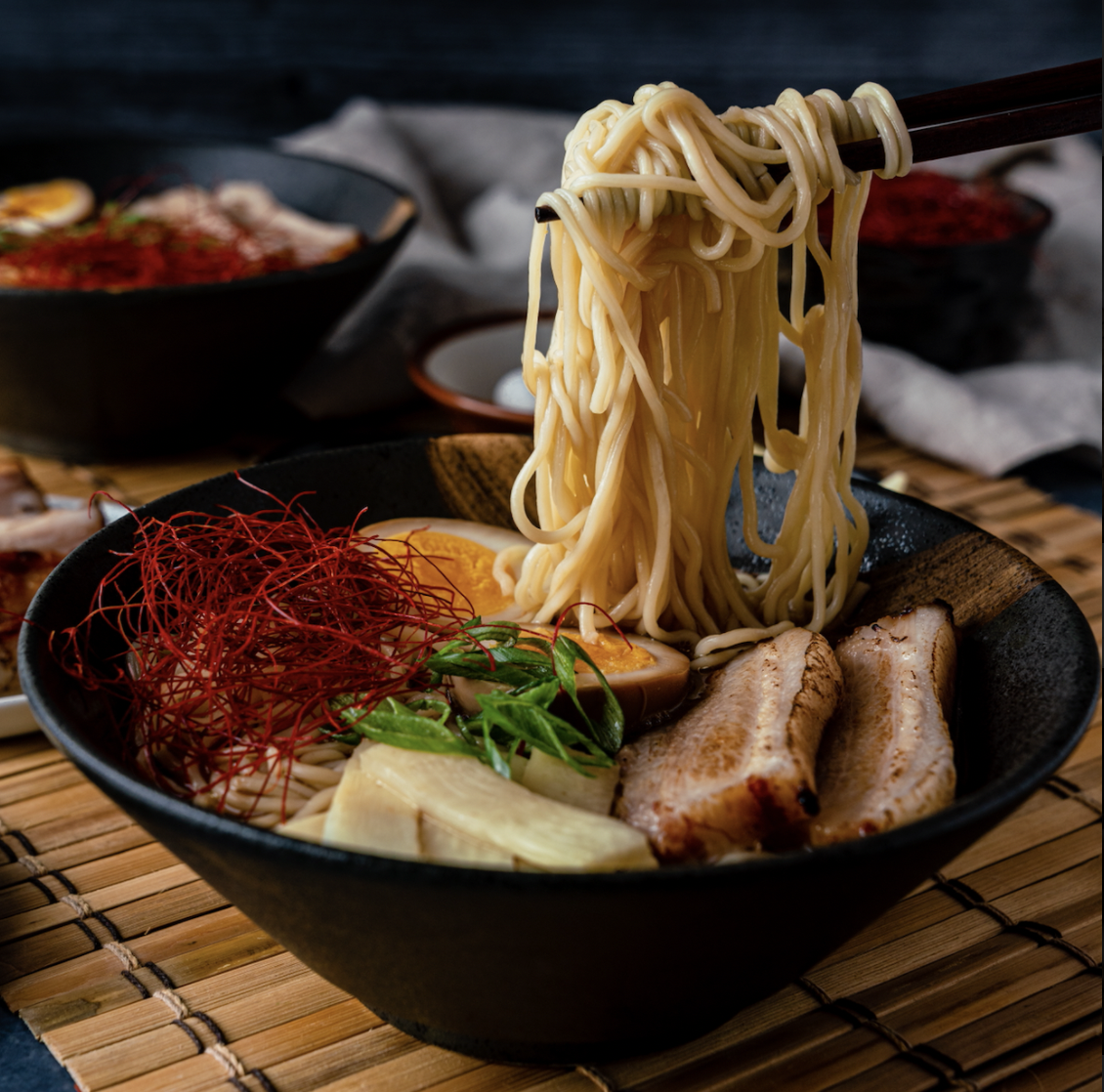 Homework: One Day Before Cooking

Want to take your dishes to next level with a step-by-step video instruction? We have on demand classes that feature dishes you never knew you could make at home. Join our on-demand virtual cooking classes here! Click here! Interested in a private event with truffle shuffle? Click here to learn more.