Beef Wellington: A Phenomenal Dish with a Murky History

We can smell the herbs, mushrooms, and shallots as we wrote this blog. We've all heard about Beef Wellington, Right? Who hasn’t? It is a classic dish that has been adored by thousands of food connoisseurs around the world.

With such rich flavors, it surely has a rich history. So we did some digging. And after hours of scrolling through websites, papers, and books, we found that the history of this classic dish is a little murky. According to some, in June 1815, the iconic Arthur Wellesly defeated Napoleon Bonaparte at Waterloo. It is believed that the pastry ensconced beef dish was named after him to celebrate his victory and him being named the first Duke of Wellington.

But, the dish was not known in Arthur Wellesley's life, so the origins of beef Wellington continue to remain a blur.

Some thought it was named after a Wellington Boot since it has some resemblance in shape after the dish is cooked, hence the name. Yet, some believed that wrapping meat in pastry has been a favored culinary technique in France and Greece for centuries. In fact in the 14th Century, the Greeks were the first to wrap pastry around their meat before cooking. And according to some, Beef Wellington resembles the French filet de boeuf en croute and may well have been renamed the Beef Wellington after the Battle of Waterloo – rather than a dish created explicitly for the Duke of Wellington.

But whatever country it came from and whoever it was who invented this infamously scrumptious dish, we definitely owe it to them. This phenomenal dish is a crowd favorite. Come on, who doesn't want to slice into that juicy and tender sirloin tucked inside a flaky puff crust. It's a dish that graced tables of many homes and restaurants worldwide, and for sure will continue to bless our tables on any occasion.

Since we're already drooling over this dish, we thought of adding a Truffle Shuffle twist to the classic Beef Wellington. On Sunday, August 22nd, at 3pm PST, Chef Tyler will be hosting a step-by-step walkthrough of making the world's famous Beef Wellington in an extended 2 and a half hour class. Yes, two and a half hours of learning and mastering the culinary techniques of making the ultimate Beef Wellington. To top it off, we'll also be showing everyone how to enjoy this dish with Sarah's original Candy Cap Manhattan that you'll enjoy serving on almost every occasion. So, what are you waiting for, book the experience now! 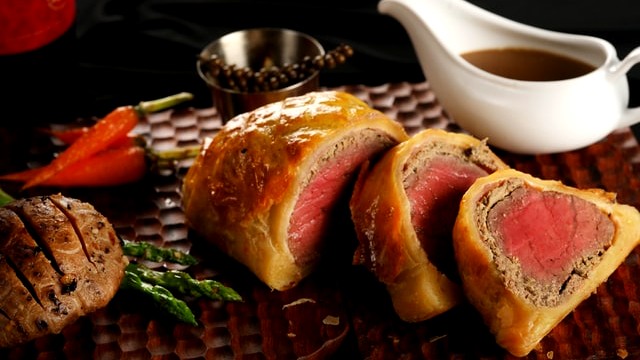 Want to take your dishes to next level with a step-by-step video instruction? We have on demand classes that feature dishes you never knew you could make at home. Click here! Interested in a private event with truffle shuffle? Click here to learn more.